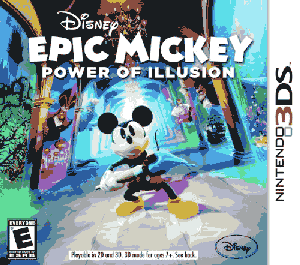 Epic Mickey: Power of Illusion is a 2012 side-scrolling platform game released by Disney Interactive Studios for the Nintendo 3DS. It is the third installment in the Epic Mickey series, after Epic Mickey 2: The Power of Two, and is marketed as a homage to Sega’s Illusion series of Mickey Mouse games, including Castle of Illusion Starring Mickey Mouse.