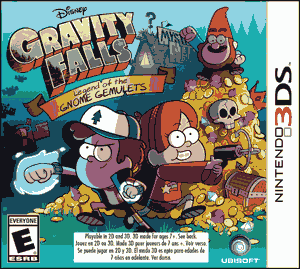 Gravity Falls: Legend of the Gnome Gemulets is a Nintendo 3DS platform video game developed and published by Ubisoft and produced by Disney Interactive Studios. It is based on the animated Disney series Gravity Falls. The game was published on October 20, 2015, and it makes use of the UbiArt Framework engine.