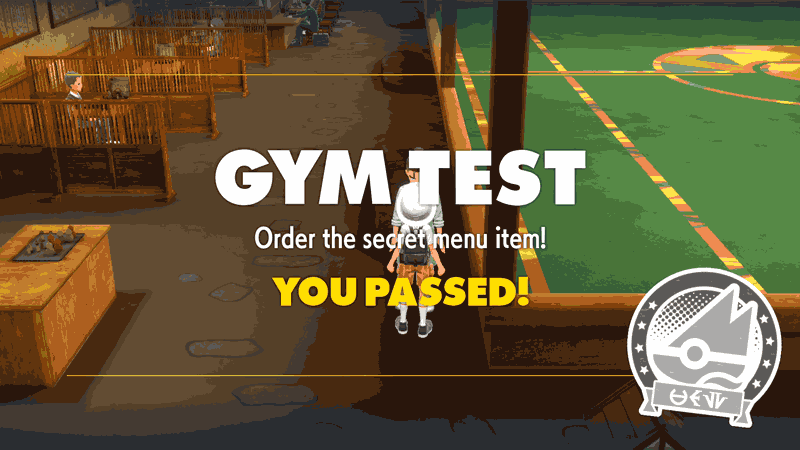 Here’s the solution to ordering the secret menu item for the Normal Gym test:

But if you want to find it by yourself, you can follow all steps below –

Your first clue is to find out how the regulars season their dishes. You can keep this clue in mind for now while you get the other clues.

As you head out of the gym, go talk to the student near the amphitheater to challenge them for a fight. After succeeding the fight, you’ll then be given another clue which is to look for a dark spot surrounded by stairs.

You don’t have to look far as you just have to head down the amphitheater and interact with the gate by the dark passageway where you’ll get the clue “Fire Blast“. Take note of this for later.

Next, head down the food street and you’ll find another student. Win the fight to get another clue that says to listen really closely to the blue bird Pokémon.

Just further down the road is a flying taxi pilot with a Squawkabilly on top of their head. You’ll have to talk to the Pokémon and wait for it to say a few of its lines until it says medium. Take note of this clue for later.

Go around the street until you find another young student. Win the fight to get the clue that says to look for something that’s the odd one out at one of the ice cream stands.

Further down, you’ll see three food stands by a corner. Check the one with the blue, white, and pink awning and then scroll down to the flavor options below to see the Grilled Rice Balls. You don’t have to buy it, just take note of this clue.

Before talking to the staff inside to give your order, go to the back of the eatery and talk to the salary man. He will give you the final clue which is the answer to how the regulars season their dishes: lemons. 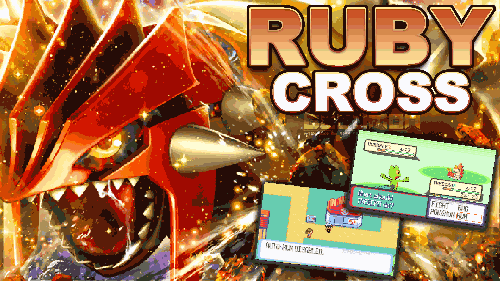 Hello, Welcome back to Ducumon Website and I’m Pokemoner. Today, we will play Pokemon Ruby Cross by Jaizu. It’s a GBA Hack ROM and based on Pokemon Ruby.

It’s the same as Pokemon Ruby but Poke Balls pocket size is 32 now, B in wild battles to hover the Run option, R to auto-run, new title screen, Item pocket size is 120, and more… It’s beta 1 when I made this video. And now, Let’s play! 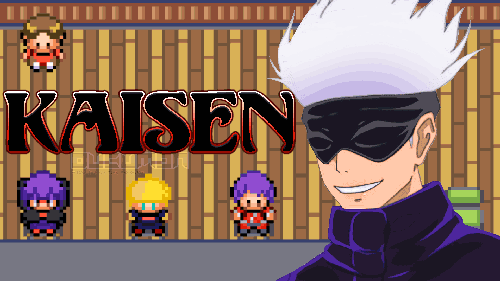 The walkthrough will only cover the main story and the two sidequests available in post-game.

Part one- Wooooz through the intro, learn about Curses, Cursed Techniques and Domain Expansion in the intro if you want to.

Part two- Land in Inken Town, head over to the bottom left building. Play through the cutscene and take all the starters. Talk to Professor Oak again, let the cutscene play.

Part three- Head over to the 2nd house on the top left. Navigate through the maze to the little girl. Fight her and exit towards Canken Forest.

Part four- Talk to Nick and left the cutscene play.

Part five- Head over to the top left part of Canken Forest. I will include the map since it’s a bit wonky.

Part six- Let the cutscene play and fight the Curse.

Part seven- Let the cutscene play and head towards the western exit of the forest.

Part eight- Navigate through this path to reach Hq.

Part nine- Head into the Pokémon Center, talk to the guy sitting at the right table and teleport into the meeting room.

Part ten- Let the cutscene play. Talk to Kerbalt to get teleported to Cankem Forest East 1.

Episode 3: What Lies Beneath

Part twelve-Let the cutscene play and solve the puzzle. The clue is given on the reading board of the same room. The last three lines are the clue. First three berry trees should be changed into color of the vegetables. Second three into color of the types of the respective Pokémon. Final three into the color of the birds.

Part thirteen- Enter into the now opened ruins. Let the cutscene play. You won’t be able to climb down the ladder unless the three trials are completed so head into any of the room.

The answer of the first question is 3.

The answer of the second question is 24.

The answer of the third question is 11.

Enter Glacial Room. Let the cutscene play. Battle Articuno, defeat it and you will be teleported to the entrance.

The order in which the you will have to stand on the panels is numbered. There is no fixed order but this is the shortest solution.

Head over to the warp panel at top middle.

Head over to the warp panel at top right.

Enter the Zapping Room. Let the cutscene play. Battle Zapdos, defeat it and you will be teleported back to the entrance.

The small pillars are switches which make the rocks in the way disappear.

But Swaggy? How we are supposed to know that?

OBSERVE THE ENVIRONMENT. IT’S LITERALLY THE EASIEST ONE AMONG THE THREE.

The order is given below.

The answer to the question will be 6. Head over to the Magma Room and let the cutscene play. Battle Moltres, defeat it and you will be teleported to the entrance.

Part fourteen- Once you’ve completed all three rooms, head down the ladder.

Episode 5: Battle at the Shrine

There are two sidequests available for post game, one of which is just for fun and another is for a bit of info about the sequel.

Both of them have Level 65 boss Pokémon so be prepared.

See you all in Pokémon Kaisen: spoilers Arc!